Apple Watch remains to be the most popular wearable around and Apple continues to update its watches and the associated OS every year to give an improved experience to its customers. There are basically two sizes of Apple Watch available i.e. 38mm Apple Watch and 42mm Apple Watch. And, no matter if you are interested in buying steel, ceramic, or aluminum, Series 1 Watch or Series 3 Watch, Hermes or Nike+, you can buy all of them in the aforementioned two sizing options. For many, picking the size of Apple Watch may be a straightforward thing to do considering factors like wrist size, style, gender, etc. while others may struggle with making the right pick. And, if you’re the second type then you should read on to do a little Apple Watch 38mm vs 42mm comparison and find out which one you should actually go with.

If you talk about traditional watches, they measure the size of the case horizontally. However, Apple measures the watch size vertically. The smaller watch comes with 38mm height whereas the larger alternative is 42mm in height. As far as the width is concerned, smaller model is 33.3mm while larger one is 35.9 mm wide.

Though the differences may not appear to be quite significant as it’s only 3-4 mm, but if you take 4mm out from 40mm, it’s one-tenth of the total dimensions of your Apple Watch.

With Apple Watch’s rounded rectangular shape, direct comparisons with a regular round watch would be hard. Nevertheless, none of the two Apple Watch sizes would feel too high or wide in the world of conventional watches. Take any big watch and you’d find it somewhere around 45mm.

So, even if you’re planning to go for something smaller, both the sizes can be taken into consideration. But if you have smaller wrists, your Apple Watch 38mm vs 42mm comparison would say you should go for the 38mm Apple Watch.

The difference in case size of two Apple Watch models also reflects that the two will differ in their display sizes as well. Both the Apple Watch models are Retina-quality and this means you can’t see their pixels with naked eye from regular viewing distance. Bigger Watch comes with more pixels, it’s as simple as that.

The display size of 38mm Watch is 340×272 pixels while that of 42mm Watch is 390×312 pixels. The watchOS fills the display no matter what size you go with. The number of pixels may not be a matter of concern for many but if you’re looking to have more pixels to have bigger images and text to show on your Apple Watch display then you should take this thing into consideration.

Though Apple Watch 38mm vs 42mm comparison reveals different height and display density options, both the watches have same thickness/thinness. The probable reason is the both Apple Watches have to hold system-in-a-package, Retina display, sensors and batter. This is also different from traditional digital or mechanical watches. So, both the Watch models have same depth perception and you can opt for any of them if this is what you are considering while making a choice.

If you talk about Apple Watch Series 3, it’s the first iteration of Apple Watch that comes with cellular capabilities. This means your Apple Watch is quite usable even when it is not in the range of iPhone. An average iPhone user has his/her iPhone within an arm’s length for most part of the day and, for that reason, it may be hard for you to imagine why you’d need cellular capabilities right on the wrist. Well, it’s not just aboutplacing calls on the Apple Watch.

Both the Apple Watch Series 3 versions have GPS support and this allow you to perform different tasks like tracking the workouts or triggering your alerts. But if you have the GPS + Cellular model then you will be able to keep it fully functional even when you don’t have your iPhone around. In that case, getting directions, placing calls, or sending messages becomes impossible just because you forgot to take your iPhone with you when leaving home or when you don’t have enough battery backup. You can do all such stuff even when your iPhone is not up to the mark. Besides, it also notifies you about all the alerts you get from the apps. The cellular models also give you wireless connectivity to your AirPods as well and stream Apple Music when you can’t access your iPhone.

So, if you are doing Apple Watch 38mm vs 42mm comparison on GPS and Cellular functionalities, rest assured that both the models are available in both of these options.

For Men Or For Women

As there are two sizes available and due to the fact that some bands from Apple can only fit one of the two sizes, this discussion has come down to which model would fit for men and which one would be for women.

Everyone has a unique size, shape and taste. Some of the women might want to go with bigger Watch model while some men might like smaller watches. Anyone with a small wrist would like to have bigger Apple Watch, while those having bigger wrists might want something smaller.

So, you should better go for a size that you like for yourself. You can try both and do a little Apple Watch 38mm vs 42mm comparison to find out which one is a better fit for your style, personality and wrist. Now that’s probably the reason behind having these different sizes and why both of them are available in identical features. 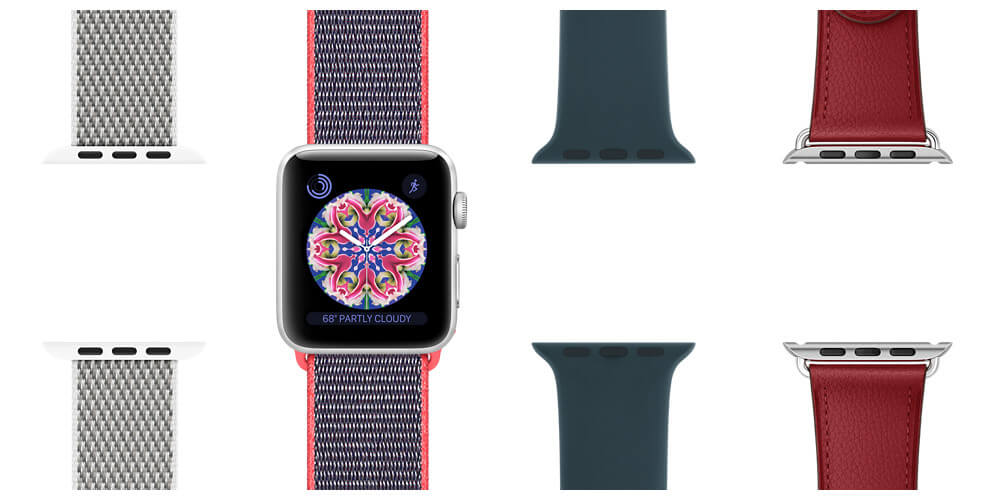 As some bands are only offered by Apple in specific sizes, you may want to search a specific band you intend to buy in a matching size for yourself. With that being said, it is also possible to get some 3rd-party alternatives to get the same size that you are looking for. So, if you’re not so serious about buying the real one then you can opt for these as well. Let’s look at some of the specific bands for each model.

Here are the bands specific to 38-mm Apple Watch.

Here are the bands specific to 42-mm Apple Watch.

Another important point for Apple Watch 38mm vs 42mm comparison is the battery life. If you talk about Apple Watch 42mm, it comes with a bit bigger battery as compared to its 38mm counterpart as bigger Watch has more space in its casing. The battery size has also seen a slight increase in Series 3 and Series 2 Apple Watch as well in comparison to Series 1.

So, if you are concerned about the battery life of your Apple Watch, maybe because you have to perform several workouts everyday or you don’t often have enough time to charge your watch everyday, you shouldn’t just go for a Series 3 watch but also for 42mm one.

As anyone would have expected, Apple Watch 38mm vs 42mm price comparison reveals that the smaller watch is a bit less expensive compared to the bigger one. And if you are planning to save a little amount of cash, better opt for smaller one.

You can buy Apple Watch 38mm for:

You can buy Apple Watch 42mm for:

Who Should Buy Apple Watch 38mm?

Who Should Buy Apple Watch 42mm?

So, this Apple Watch 38mm vs 42mm comparison must have given you great insights into which one is a better buy. In fact, both the Watch models seem to have more or less same feature specifications and the changes can be expected in the hardware only. So, it becomes more of a matter of preference in terms of price, battery life, bigger or smaller size and your own personal taste to decide which Apple Watch would be a better fit for you. You can make a choice accordingly as well.

The ECG Feature In Apple Watch Series 4 Might Have Saved Life Of The Patient, Says Doctor

How To Unpair Apple Watch – Different Options You Can Consider