The latest privacy feature from Apple which affects the way third-party applications would be able to track the activity of the user is now live and is showing up on iPhones and iPads.

All the iPhone/iPad users who are currently running their devices on iOS 14 public version, and also those giving iOS 14.4 beta a try, have reported instances of seeing this new tracking permission prompt appearing on their devices.

It’s quite likely that you are already familiar with the change as the smartphone manufacturer had first planned to bring this change earlier in 2020 but it was later postponed to allow third-party application developers more time for the necessary preparations ahead of the privacy feature being enforced.

Recently, Facebook has actively been vocal about this new change. The biggest social network of the world published several full-page newspaper ads aimed at attacking Apple’s decision as they claimed that it’s going to hurt small businesses. According to them, the move from Apple was purely about profit than actually enforcing privacy.

It’s likely for these conservations to carry on publicly and privately. However, for now, it appears that some of the users have already started experiencing this change which is set to become a routine thing by early next year. One such application is the NBA app where the users are already getting this activity tracking alert, containing custom text stating that any data collected “will be used to provide you a better and personalized ad experience.” 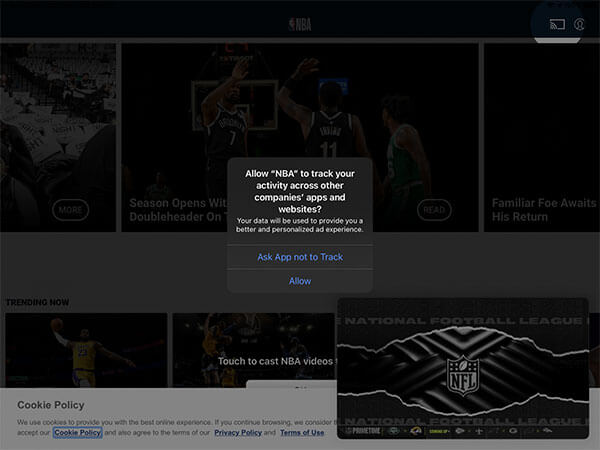 The Facebook/Apple war is likely going to continue but Apple enjoys support from the EFF (Electronic Frontier Foundation) after they said that Facebook’s stance is “laughable”. Apple is of the view that users should be aware when they’re collecting any data about them and, as it appears, EFF is firmly backing their approach.

iOS 14.4 is currently in its beta form and is undergoing testing but it’s likely to ship to the compatible devices by February 2021 at most. Once this update is rolled out, the masses will likely start seeing the privacy tracking prompt and it will appear more regularly on their screens.

So, are you waiting to find out which apps are collecting your data regularly and tracking the activities you perform across other services? Get ready for that as the time is not too far away and it’s just the matter of a couple of months before you could be able to do that.

Get Amazing Bluetooth Speakers In This Massive AirPod For Wireless Playback, Handsfree Calling, And Much More

Is It Worth Upgrading To New Apple TV?

Somebody Just Ran Ubuntu On A Jailbreak iPhone