iPad Pro 12.9 Review – The Biggest Ever iPad From Apple

Before iPad Pro 12.9 was introduced, the iPads were getting sidelined with no major real innovations coming up but the trend was shifted with the introduction of this wonderful new machine. Almost every iPad Pro 12.9 review has talked positive about this gadget except about its too big size. In fact, the biggest iPad available by now, it may still be a sought after feature for many.

It is still a great iPad to have despite the introduction of smaller models. If you are not worried about weight and big size of this machine then you’d probably love using it.

The iPad Pro 12.9 comes with an expansive design but otherwise seems identical to various smaller tablets that fall in this range. Similar to other models it’s a thin machine that is not more than 6.9 mm in thickness.

The design principles implemented on this machine are very much the same as that in iPad Air 2. Whether it is the material, edging, general layout or anything else, they all match identically. However, buttons, headphone and lightning ports and Home button equipped with Touch ID aren’t positioned exactly in the same way as they were in smaller iPads.

The size of the home, volume and power buttons is pretty much the same as in Air 2 while power button is now placed closer to device’s right hand edge.

Despite being thin, the tall iPad Pro may not be comfortably used with one hand. It still serves those looking forward to iOS gaming as well as designing.

When it comes to the Display, 12.9” screen is the biggest every produced by Apple for a tablet and it is even bigger compared to the ones often used by competitors. The resolution is also high and makes it great for sharp display. The pixel density, however, remains the same as in iPad Pro 9.7 and iPad Air 2.

James Barret – June 8, 2017
Among the many announcements made at the Apple’s Keynote event this time, one was related to the Amazon’s Prime Video App. According to Apple, Amazon is bringing the Prime Video application to Apple TV later this year.

The screen also offers the typical Apple quality but comes with some wonderful viewing angles allowing you to take a good look from virtually any angle you can name. 1552:1 contrast ratio is quite fantastic as well with 0.25cd/m2black point is probably the lowest noticed with any non-OLED display.

The iPad 12.9 Pro comes with 4 speakers which makes it great on this account too. It also makes use of orientation sensors with which the top 2 speakers are used as stereo speakers while the bottom 2 work for low-frequency sounds. As a result, the tablet becomes wonderful option when it comes watching movies on Netflix. You won’t need to plug in external speakers or headphones.

In our iPad Pro 12.9 camera review, we’d say that there are other tablets available with better camera and if you are looking to get this one as your photo partner then you should better let it go. iPad Pro 9.7 would be a better option for that as it gives you everything you get with some of the latest iPhones from Apple. 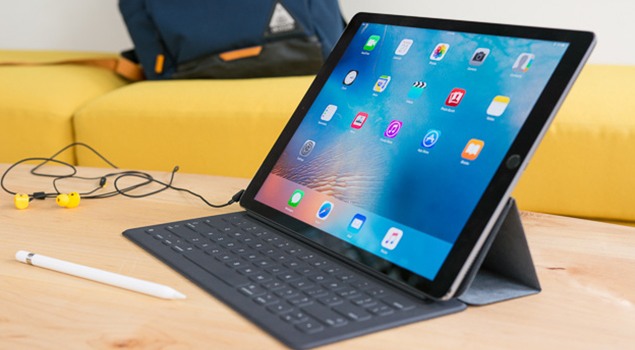 iPad 12.9 Pro isn’t just the best tool for creative people, it works for you even if you’re into word processing as well. The smart keyboard that accompanies your Pro Pad doesn’t only offer you a dedicated mechanism for text entry but also serves as your iPad Pro cover. Though it makes it a bit heavy, but there is ample protection offered too.

Some type of fabric covers the keys and it can be wiped clean easily. In my experience, it made me a bit uncomfortable as I wasn’t able to pick up some good speed at the beginning, but that was sorted out once I got used to it.

The Pro Pad uses dual-core A9X processor that uses A9 chip which is also used by the iPhone 6s. The chip, combined with its powerful GPU, helped it score a massive 5476 in Peacekeeper browser test to wipe the competitors clean. So, it’s a solid machine with optimum performance and can still be a better choice for many.

With its big chassis, the iPad 12.9 Pro allows for a big 10,307 mAH battery. Despite powering the big screen of the Pad Pro, battery is enough for regular usage for a whole day. On video playback it lasted for almost 9+ hours when run at 170cd/m2 screen brightness.

So, I’d say despite newer models available these days, iPad Pro 12.9 is still worth a buy with its little downsides. Hopefully, this iPad Pro 12.9 review will be helpful!