Platforms State Of The Union – Major Highlights From WWDC 2017

There is a lot of buzz already about the recently conducted WWDC 2017 keynote event that was held on 5th of June. If you have missed out on the even then here we have compiled some of the major highlights from the event. Take a look and see what major changes are on the cards.

Let’s take a look at some highlights from the keynote event. 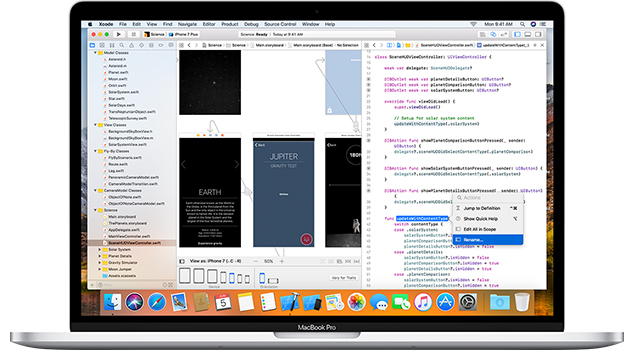 With the new, updated indexing engine – which becomes the part of build process as it runs –Xcode now loads a lot quicker. With Open Quickly, the projects are opened in a far quicker manner and searching speed is increased by 50 times as well. And performance is also increased with newly updated build system.

We now have an updated editor for source code of Xcode. Apple says it now has buttery smooth editor when you scroll it. New font, cursor type and line spacing options have been added to preferences. It can also perfectly render Markdown files as well.

The new editor comes with better transformation and refactoring engine and gives better control over the code. You can do whatever you want from main editor. Here are a few transformations announced by Apple:

According to Apple, they were told by GitHub that 2/3 of GitHub commits came from the MacBooks and, therefore, they decided to go for some integrations. Logging in with the GitHub account will make Xcodeto show all the repositories you may have. With the source control navigator in Xcodethings are now a lot simpler when it comes to viewing tags, branches, etc. The navigator allows you to create as well as merge branches from within.

The first thing, updated simulator is now faster and comes with whole new look. It is possible to use hardware buttons –Home, silence, sleep/wake – in the same way as you do in the real life. Same is the case with gestures from screen’s edge.

When running tvOS and iOS devices on the local network, there is no need to worry about USB cords. All the apps can be installed, run and debugged wirelessly on these devices. According to Apple, these tools can be used in Accessibility Inspector, Instruments, Quicktime Player, Configurator and Console.

Separate installation of macOSis not needed now. Xcode Server can be enabled from within the Xcode 9 to run integration bots continuously.

Stage time was given to Swift 4 at keynote event. A few performance improvements have been announced for this open source programming language. It now comes with some new features, small-sized app binaries and smaller build times.

No Problems With Swift Migration Now

Migrating is a lot easier now with the Swift 4. There is no need to change the code for using new compiler. It is possible to use new features from Swift 4 and you can still be able to use the Swift 3 for other areas. The Swift 4 compiler works in three modes.

Some Other Updates Made To The Swift 4

There are quite a few updates made to the Swift 4 and here we have listed a few of them:

New APIs have also been introduced at Keynote event of WWDC 2017. Let’s take a look at these.

With this API you can link your game or app to your local music or Apple Music library. It is possible to make playlists and add songs while playing music from both the sources. The users who don’t have the subscription for Apple Music can be allowed to choose the option.

The Core ML technology of Apple works with the Siri, Maps, Camera and Messages apps. With this, you can be able to integrate models of machine learning to be able to build apps that have some flawless new features without requiring much work on your part. According to Apple, all it takes is a code spanning over few lines. In Core ML, both Natural Language and Vision APIs are included. Let’s take a look at description of both these options.

HOW TO JAILBREAK IPHONE/IPAD WITH IOS 7.0.4 USING EVASION 7

James Barret – May 15, 2017
With the updates made to evasion 7, many fixes were provided for Cydia as well as jailbreak. It solved quite a few concerns and now it is recommended for jailbreaking iPhone. So, if you have been looking for the answers to how to jailbreak iPhone, here you have the detailed procedure for jailbreaking your phone.

This new framework allows you to take the benefit of iPad and iPhone’s camera and sensors for creating that experience of augmented reality. Apple gave incredible demo for ARKitat WWDC 2017. The new framework combines data coming from sensor and camera for tracking everything that comes in the view. Apple calls it “Visual Inertial Odometry”.

It was also announced that macOS High Sierra is going to offer support for virtual reality. Anyone willing to try this new experience may be able to buy the development kit for $599 to be able to develop as well as test the VR content. It, however, requires Macs having connectivity for Thunderbolt 3.

The apps using OpenCL, OpenGL and Metal can now be able to benefit from better performance offered by external graphics processors. This Kit comes with everything needed for starting to optimize advanced 3D and VR apps on the external processors using macOS High Sierra.

These were some of the major highlights from the WWDC 2017 event. Share with us what made you jump off your seats. If we missed something awesome that should have made it to this post, let us know in comments section.