Know The Latest Capabilities of Improved Siri With iOS 11 Apps

After all the capabilities added to Siri in its last year’s update, both users and developers were full of joy. You just had to tell Siri to do a task for you and it would do that for you. And, the good news is that Apple continues its great work at making Siri even better with the release of iOS 11. There is support for a few new app tie-ins that make it even better.
Jump To Section:
Can Siri Control All The Apps Now?
Why Such Small Number Of Apps Yet?
How Siri App Tie-Ins Work?
Using Siri With Apps – Examples
Are There Any Privacy Concerns In Using Siri This Way?

Can Siri Control All The Apps Now?

Well, Siri still can’t have control over all your apps. Currently it can work with 10 different kinds of apps for iOS 11 users. Here is what you can control using Siri now.
VoIP Calling

If you are not sure that whether Siri will work with your desired app or not then you can simply try it out. Tell Siri to do something with the app and if that works out you can use it in future and if not Siri will come up with its apologizing message that it’s not set up yet to work with the app.

Why Such Small Number Of Apps Yet?

Well, we’d say Apple’s focus is on quality as of now rather than quantity. They’re coming up with some robust integrations not requiring the users to talk to Siri in a particular way, constrain themselves to particular words, or have some specific order for sentence construction. They’re trying to let the users talk to Siri naturally as they would with someone else. So, it translates into generating complex vocabularies for every integration as well as covering all the potential accents and addressing options imaginable.

It’s the ‘idea of intents’ that these tie-ins work with. Apps fitting in a particular category describe a certain set of things that they are able to do, or “intents”, and the rest is taken care of by Siri. 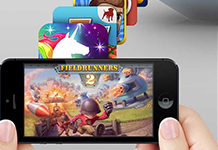 BEST NEW IPHONE GAMES THAT ARE ALL WELL WORTH A TRY

JAMES BARRET – Jun 4, 2017
The iPhone’s been around for long time to now. But Apple’s iOS remains productive ground for an extensive variety of boundless mobile games across every genre. Equipped with strong graphics and approachable touch screens….

Even though iOS 11 will be launched this fall and we’ll have to wait until then to find out what new capabilities have been added to Siri but let’s take a look at some examples of using apps already tied-in to Siri.

LinkedIn: Sending messages to someone in your LinkedIn network: “Hey Siri, use LinkedIn to message Phil saying, ‘Good luck for today’s meeting’.”

WhatsApp: Sending messages to your contacts by speaking them to Siri: “Hey Siri, message Georgia using WhatsApp that I’ll get there within 15 minutes.”

Talking about new “intents”, here are a couple of examples that you should take a look at.

HOW TO CONNECT YOUR ANDROID DEVICE WITH MAC

James Barret – May 17, 2017
It is often seen that tech enthusiasts are interested in cross-platform compatibility. They want to enjoy concurrent use ofdifferent devices they own. If you are a Mac user while you use an Android phone then you would definitely be interested in using both the devices together.

Car Commands: Siri can also be used for managing door locks of your vehicle as well as acquiring information about it. You can say, for instance, “Hey Siri, honk the horn of my car” or “Hey Siri, is the car locked?”

Are There Any Privacy Concerns In Using Siri This Way?

For Apple, your privacy is of prime importance and nothing is more important than that. Any apps that are tied-in to Siri are able to receive your commands and act accordingly but they do not have access to any of your personal information that may be important to you. The parsing is done by Apple and only intents are passed to various apps. So, you can really have better functionality without compromising your privacy at all.
The iOS 11 is coming with some great new features and it will surely improve the number of app tie-ins to Siri to make it even better for you.

How To Enable Netflix, YouTube Or Any IOS 14 App In Carplay